You are here: Home1 / News2 / Newsletter and Updates3 / Made in America: The Pursuit of Life, Liberty and Global Opportunities

Made in America: The Pursuit of Life, Liberty and Global Opportunities

This election season, Republicans and Democrats don’t seem to agree on much. But 95% of voters — regardless of which U.S. presidential candidate they favor — support American-made products. The vast majority of Americans also favor training programs, trade enforcement, tax incentives and a national strategy to support U.S. manufacturing, according to the Alliance for American Manufacturing. This organization is a not-for-profit, nonpartisan partnership of leading domestic manufacturers and the United Steelworkers labor union.

With the momentum that’s building behind the Made-in-America label, it may be time for your business to rethink its supply chain partners and marketing strategy.

Manufacturing is by far the most important sector of the domestic economy in terms of total output and employment. It represents a significant portion of the total jobs in many southern and midwestern states, including:

In turn, the manufacturing sector also impacts the demand for goods and services from other sectors, such as energy, construction, accounting, engineering, software, and temporary help firms.

Over the last few decades, millions of manufacturing jobs have been lost in the United States. The primary culprit has been outsourcing to nations with lower wages and fewer regulations, such as China and Mexico. The United States has also been slow to recover from the recession that spanned from 2007 to 2009. Other reasons for manufacturing job loss include reduced spending on infrastructure by state and federal governments, as well as inadequate public policies on taxes, education and energy.

States that have lost more than 200,000 manufacturing jobs since 1998 include:

The Reshoring Initiative — a not-for-profit group committed to bringing back U.S. manufacturing jobs — reports that more than 249,000 jobs were reshored from 2010 to 2015. Last year was the second consecutive year that the number of jobs returning to the United States was slightly higher than the number of jobs leaving. (By comparison, our net loss of manufacturing jobs to offshore locales was about 220,000 per year from 2000 to 2007.)

But there’s a long way to go before we break even. The Reshoring Initiative estimates that there are currently 3 million to 4 million manufacturing jobs still offshore.

Regardless of your political affiliation, you might want to jump on the reshoring bandwagon. Many U.S. consumers are willing to spend more for products that are made domestically to support the U.S. economy. So, the Made-in-America label can add value by creating goodwill and bolstering your company’s perceived brand image.

According to the Reshoring Initiative’s 2015 Data Report, there are many other benefits to bringing manufacturing operations back into the United States, including:

The reshoring trend shows no sign of slowing as the reasons for doing business domestically continue to grow — and the financial incentives to seek greener pastures offshore continue to diminish. Many of these companies are choosing to reshore to southern states, which tend to offer comparatively low state tax rates and employer-friendly right-to-work laws, which reduce the bargaining power of unions.

Before you redesign your packaging to include the American flag or launch a Made-in-America advertising campaign, however, it’s important to review relevant Federal Trade Commission (FTC) standards with your legal advisers. In a nutshell, you can’t legally claim that a product is American-made unless final assembly takes place here and the majority of total manufacturing costs are spent on domestic parts and processing. This may require you to revise where your plant operates and which suppliers you use.

Compliance with these rules is more complicated when a product’s various components are manufactured in multiple locations. The FTC allows qualified claims when a product is made in several countries. For example, a company can spell out clearly the percentage of a product’s content that’s made in the United States. Or manufacturers can use qualified phrases such as an appliance that is “assembled in the USA from imported parts,” or a pillow that is “made in China, filled in the USA.”

A Made-in-America claim can also be implied. For example, images of an American flag or an outline of a U.S. map may convey domestic origin. The same may be true of a company ad in which a manager describes the “true American quality” of products that come from its factories.

For some businesses, using offshore manufacturing sites and suppliers continues to make sense financially or strategically, especially for businesses that rely primarily on less-skilled workers; offer low-tech, commoditized products; or sell to customers overseas. Deciding which countries to operate in is complex and involves numerous quantitative and qualitative factors. Relying on gut instinct or simply “following the industry leader” can be risky business.

Contact your financial, tax and legal advisers to help determine whether reshoring makes sense for your specific business. If so, your team of advisers can also explore state economic development incentives to find the most advantageous place for you to resume business in the United States. 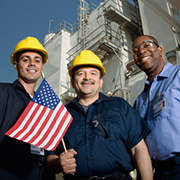 “Reshoring” manufacturing jobs back to American communities from foreign soils isn’t the only way to reduce our trade deficit. The U.S. economy can also expand by exporting more products to foreign consumers. More than 95% of the world’s consumers live outside the United States, according to data published on the federal government’s BusinessUSA website.

In February 2014, President Obama launched the “Made in Rural America” export and investment initiative. The purpose of this project is to provide federal resources to help rural businesses and community leaders take advantage of global exporting opportunities. Rural communities, including the Appalachian and Delta regions, have been hit especially hard by manufacturing job loss in recent years. This initiative is a joint effort of the U.S. Department of Agriculture, the U.S. Department of Commerce, the Small Business Administration, the Export-Import Bank, the Office of the U.S. Trade Representative and other federal agencies.

Here are some of the resources the Made in Rural America initiative has provided over the last two years to further export opportunities:

Export counseling. Trade specialists in over 100 domestic locations help rural businesses connect with foreign buyers through the Department of Commerce’s U.S. Export Assistance Centers and in collaboration with field staff from the Department of Agriculture.

BusinessUSA online platform. This website serves as a “one stop shop” that matches businesses to export and investment resources provided by the federal government.

New Overtime Rules Issued: What it Means for You